Back to events
Workshop, Bring your harp!

Hermanos Corbalán - The Essence of the Paraguayan Harp

In this workshop, Sixto and Juanjo will focus on the traditional music of Paraguay, full of contrasts and rich tone and introducing authentic sounds. We will discover how these can be developed and applied to composition and improvisation as a rhythmic and melodic resource, applied to all types of harp.

For guidance on how to access Zoom workshops or anything else Festival-related, please visit our FAQs. 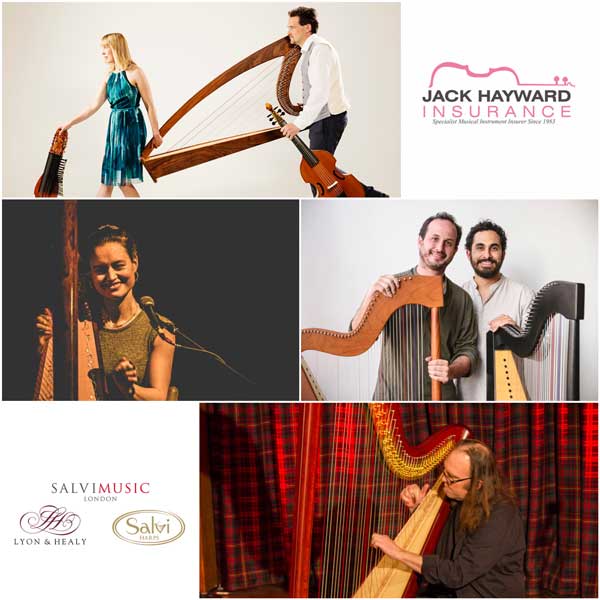 19:00-19:30 Harp to Harp pre-concert conversation: Mary Macmaster and Patsy Seddon talk about their musical times together both in and outwith the Festival Music from 19:30, with an interval Dråm The Swedish musicians Erik Ask-Upmark and Anna Rynefors - known as "Dråm" perform their Nordic music in a captivating way with much charm and humour. The quietness of Sweden’s deep forests and wide open spaces is reflected in the sonorous qualities of the harp, which goes back to Viking times, blending perfectly with the haunting and mellow Swedish bagpipes and the unique Swedish instrument, the Nyckelharpa (keyed fiddle). They are both Riksspelman - “Master Musician of the Realm” and have taken their music to many places, including Anna playing for thousands of children in The Three Billy Goats Gruff and Erik performing in China on the World’s first ice harp! Dråm approaches Nordic music with respect and love, imparting a contemporary and passionate character to a tradition. Esther Swift Esther will perform her own Time Spinner for solo pedal harp, commissioned by her former harp teacher Eira Lynn Jones, which was written in celebration and honour of the life of their mutual friend and fellow harpist Helen MacLeod. She will follow this with her own setting of Problems to Sharpen the Young, a poem about immigration in the context of a 9th century recreational mathematics problem, by Irish poet Rachel McCrum. She will then perform one of her favourite songs by Kate Bush, as well as her lockdown single Song for a Quiet Winter as recently featured on Radio 3’s Night Tracks. Park Stickney “Yes, my office is always this clean”: a video house concert with Park Stickney, involving jazz and serendipity. An at-home concert which explores the question “Can we possibly make this any more logistically convenient?”, a concert with the smallest possible carbon footprint. Stickney will perform while wearing one of his prized collection of (2) Edinburgh Harp Festival t-shirts. This, however, isn’t surprising as he’s been basically wearing them nonstop since March 2020. [flash photography and filming strongly encouraged] Hermanos Corbalán   Sixto and Juanjo will take us on a journey through the musical landscapes of their native Paraguay, full of harmonies and sounds that have their roots in the compound 6/8 time typical of that region. Their virtuosic and expressive playing will transport us into the freedom of their world of harmonic, rhythmic and melodic improvisation. Tickets £4-£12 Concert links will be emailed to you shortly before the Festival All concerts will be available to watch at your leisure until midnight on Monday 26th April